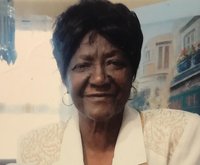 Mary Ann Hardy, age 72 of Inspiration Arc, Virginia Beach, VA. entered eternal rest on Wednesday, September 30, 2020 at Sentara Princess Anne Hospital. She was a native of New Bern, North Carolina. She relocated to Long Island, NY at the age of sixteen, where she met and married the late Edward Hardy, Sr. Mary lived there for most of her life, before relocating to Virginia Beach, VA in 1999. She attended Rehoboth Baptist Church, at 181 S. Birdneck Road, Virginia Beach, VA led by Reverend Harry C. Poole. Aunt Mary which she was known as to many, never met a stranger. She had a lot of adoring friends that love her dearly who she would do anything for. She was very out spoken and headstrong when it came to her beliefs. Aunt Mary enjoyed music and decorating her home during the holidays. She leaves to cherish her memories a daughter Robin Lawson of Elizabeth City, NC, a son Edward Hardy of Virginia Beach, VA and a grandson, Robert Kite of Virginia Beach, VA. Four sisters and a host of nieces, nephews and cousins. Mary's life will be celebrated through a private service.