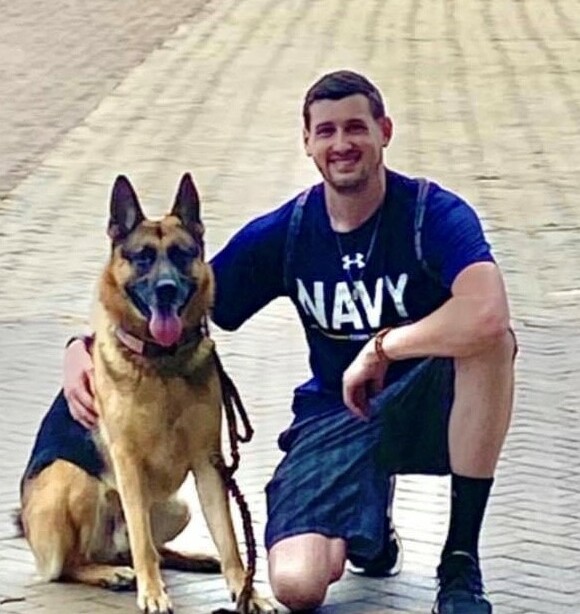 Our beloved Brendan Richter Corrigan went home to his angels on July 15, 2022 after 31 years filled with vibrant life, laughs and giving to others. He was a cherished son, big brother, nephew, cousin, friend, and dog owner. He gave his life to save his dog, Gadsden, in a tragic swimming accident at Virginia Beach. His infectious laugh, wit, humor, beautiful blue eyes, loving and all-encompassing hugs, humble and giving spirit, and unbridled enthusiasm brought joy to many. He lived his life with honor, dignity and integrity and will be deeply missed and kept in our hearts forever. Brendan was born on October 8, 1990 in Charleston, South Carolina to Terry (née Dovgala) and Tim Corrigan, CAPT (ret.), USN. Being part of a military family, Brendan lived in different places and led a very full life, including achieving honor student status, attending Virginia Tech and being accepted into the Corps of Cadets, being an outstanding hockey and lacrosse player, teaching himself drone piloting, and creating a range of unique art, both hand-drawn sketches and digital products such as web pages and drone photography. In his down time, you could either find Brendan on the ice hockey rink, on the water, or onto his next self-taught project. Nothing could stop Brendan’s curiosity and eagerness to try new things. Brendan’s natural habitat was the outdoors where he found peace and would go on endless adventures with his best friend and loving dog, Gadsden. He was often on the beach, in the water, or surrounded by nature itself. His outdoor travels included trips to Yellowstone and the Grand Canyon, as well as hiking parts of the Appalachian Trail. He is survived by his mother and father, Terry and Tim Corrigan, his sister, Kelly, his many aunts, uncles, cousins, and friends, and his loyal dog, Gadsden. He is met at the gates of heaven by his four grandparents, his aunt Mary Catherine, numerous other family members, and his first beloved dog, Ben. A memorial service will be held on Saturday, August 27 at 11 AM, beginning with a Mass at St. Ann’s Church in Lawrenceville, NJ followed by a Celebration of Life gathering. Interment will take place at a later date in St. Mary’s Cemetery in Trenton, NJ. Brendan was adamant about making people’s lives better and it is only fitting that his last act was the gift of life. On the anniversary of his grandfather’s birthday, Brendan gave his heart, both kidneys and liver to save five people’s lives as well as other gifts, including corneas, skin, and more. A special thanks to the bystanders, first responders, ER and ICU teams at Sentara Virginia Beach General Hospital, and the LifeNet team, who all made it possible for Brendan’s final act of donation. Through our tears of sadness to the tears of happiness of those organ recipients and families, in Brendan’s beautiful memory, please become an organ donor. www.organdonor.gov #signupforbrendan