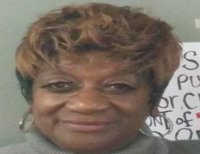 Mary Ann Washington Ward was born on November 27, 1947, in Hampton, Virginia. She was the first of three children born to the late Odis Washington, Sr. and Hattie L. Nettles (Eugene). At an early age she professed her faith in Jesus at Grays Missionary Baptist Church in Hampton Virginia. Mary was once married to Leon Ward for 16 years and they parented Angela and Alicia. She received her secondary education at Phenix High School in Hampton, Virginia. She received a secretarial certificate from Enterprise State Junior College in Enterprise, Alabama. She then went on to earn a Bachelor of Science Degree from Troy State University in Dothan, Alabama. Mary retired as a Safety and Occupational Health Specialist at Fort Monmouth in 2011. Mary was an active member of Living Word Christian Fellowship. As a result of her generous spirit and pleasant personality, she joined the usher board and also enjoyed teaching Sunday school there. She was also an active member of the Elks Lodge in Red Bank, Phyllis Wheatley Temple #276 where she served as a financial officer also holding a seat as a state officer, receiving her highest in elkdom under the grand treasurer department. In addition, she was an active member of the Order of Eastern Stars, Adah Chapter #17, Asbury Park, New Jersey. Her hobbies included traveling, bowling, singing, dancing, and spending time with her family. Her influence will forever remain in the lives of all who knew her. She was like the sun, a force, light, and capable of igniting any space she entered. She quietly departed this life on Sunday, November 13, 2016 at Monmouth Medical Center in Long Branch, New Jersey. She is preceded in death by her father Odis Washington, Sr. of Hampton Virginia and brother Odis Washington, Jr. of Birmingham Alabama. Her beautiful life will forever be cherished in the lives of her children; Angela Ward of Lithonia Georgia, Alicia Ward Robinson of Stone Mountain Georgia; mother and father Rev. Hattie and Eugene Nettles of Hampton Virginia; brother and sister-in-law Herbert and Denise Washington of Powder Springs Georgia; special friend Willie Thomas of Eatontown New Jersey and a host of devoted nieces, nephews, cousins, friends, classmates, and neighbors. Funeral services will be held at Living Word Christian Fellowship in Neptune, NJ on Saturday, November 19, 2016 at noon. Memorial Service will be held at 11:00 AM, Monday November 21st at Bethel AME Church, interment will be will follow at Hampton Memorial Gardens.