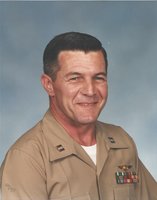 Lewis “Luke” Crouson died peacefully surrounded by his loving family on October 2, 2019. Luke was a devoted husband, father, grandfather, and a longtime resident of Chesapeake.  He is a veteran of the U. S. Marine Corps serving proudly for over 21 years.  After retiring from the Marine Corps he served at COMNAVAIRLANT at Norfolk Naval Base for an additional 26 years.

Along with his military career Luke will be remembered for his love of his Country, enjoyment of old cars, western movies, and especially time spent with his family.

Left to cherish his memory are: his loving wife of 48 years “Char”,  adoring sons Luke and his wife Tamatha, Paul and his wife Tracie, and Daniel and his wife Marsha.  His grandchildren and grandson-in-laws: Peyton and her husband AJ, Amber and her husband Kevin, Abagail and her husband Julian, Hailey, Haleigh, Ethan, Alyssa and Sarah.  He will also be missed by his mother-in-law/movie partner Joyce Cook “Grammy” and his surviving siblings Jim, Terry, Tom, and Sharon.

He will be missed greatly by everyone, but is now with his beloved father and mother Harry and Margaret Crouson; along with his brother, Michael Crouson.

The family would like to give a special appreciation for the love and care of Holli, Melissa, and Suki  from Medi Hospice Care, who went above and beyond.

If you feel moved to send flowers, Luke would have wanted the money to be spent in the support of Gary Sinice’s foundation to honor all those that serve their country: https://www.garysinisefoundation.org/donate/