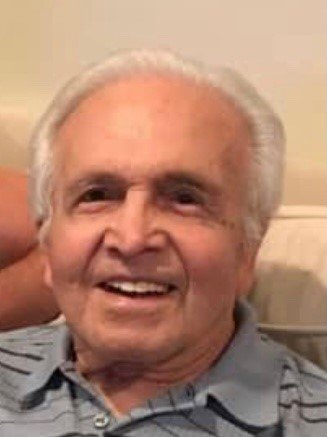 Please share a memory of Nicholas, Sr. to include in a keepsake book for family and friends.
View Tribute Book
On November 13th, 2020 Nicholas Grimaldi, Sr. passed peacefully at 91 years old (39 and holding, if you would have asked him). He was a beloved Husband, Father, Grandfather, Uncle and Friend. Born at home (in 1929) and raised in Stamford, he graduated from Stamford High School. He worked for the Stamford Water Company (Bridgeport Hydraulic Company) and he retired in 2002 after many years reading meters. He is survived by his wife of 48 years, Patricia; 3 children - Febe in Sweden, Nicholas and his wife Stephanie in Virginia Beach, Anthony and his wife Amy in Norwalk CT; his 5 grandchildren: Josh, Parker, Dillon, Leo and Vincent; many Nieces, Nephews, Great Nieces and Nephews; and many friends, especially from the “Old West Side of Stamford”. In fact, some of his more humorous sayings would often be classified as an “Old West Side Joke”. Despite his smaller frame, he was truly a force to be reckoned with. He was a professional boxer, having fought and won at Madison Square Garden in 1957. At 91 years of age he was still boxing, despite a diagnosis of Parkinson’s through programs at the Y and Rock Steady Boxing in Virginia Beach. But those that loved him knew his toughness was only surpassed by his kindness and his big heart. Nick enjoyed life and had many interests and activities. He loved the ocean and the beach having been a Lifeguard in Stamford at West Beach for many years where he met his wife. As a Lifeguard, he saved many lives in the channel when he wasn’t jumping off the top of the telephone pole into the water for a swim. He also did deep sea diving for the electrical company. Always loyal, he was in the Army for a few years at a time of peace. He was passionate about sports and shared that love by coaching several Stamford Youth Hockey teams and even traveled along with his son's team to Sweden as part of a youth hockey exchange program. He enjoyed watching all of the NY sports teams and frequently reminded anyone that would listen that “Joe DiMaggio was the greatest center fielder in baseball history.” But most important to him were his children and grandchildren and watching them play on and off the fields brought him the greatest joy. The Chief, as we affectionately called him, lived his best life and leaves many friends and loved ones to carry his memory. The amazing experiences he had in the 91 years are impressive but he would just say “it is what it is .” He rests in peace now, joining his Mother and Father, brothers and sister, and mother-in-law, plus his favorite canine companions David, Mocha, Rosie, and Bennett. We take peace in knowing they are all together in Heaven now. A Remembrance Ceremony for Nick will be held in his hometown of Stamford, Connecticut at a date later to be confirmed. In lieu of flowers, the family requests donations to the Michael J. Fox Foundation for Parkinson’s Research in his memory https://www.michaeljfox.org/homepage
To plant a beautiful memorial tree in memory of Nicholas, Sr. Grimaldi, please visit our Tree Store

A Memorial Tree was planted for Nicholas, Sr.
We are deeply sorry for your loss ~ the staff at Walton Funeral Home
Join in honoring their life - plant a memorial tree
Online Memory & Photo Sharing Event
Online Event
About this Event

Share Your Memory of
Nicholas, Sr.
Upload Your Memory View All Memories
Be the first to upload a memory!
Share A Memory
Plant a Tree