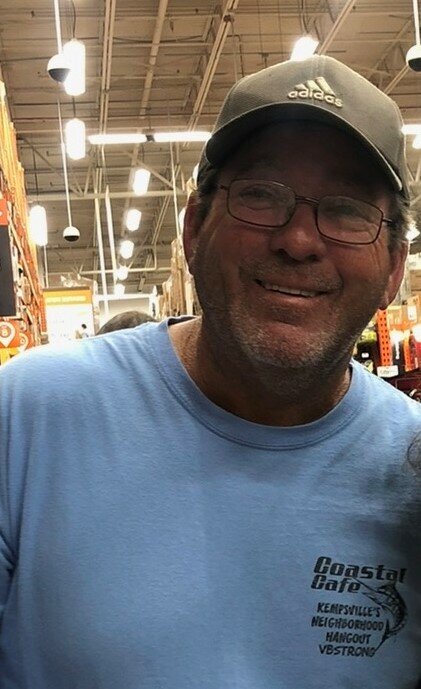 Please share a memory of John to include in a keepsake book for family and friends.
View Tribute Book
John Lee Murphy Jr., 60, a true “Arrowhead Boy”, passed away unexpectedly on September 15, 2021. He was born in Norfolk, VA on August 20, 1961 and was a life-time resident of Virginia Beach. He attended Kempsville High School and completed an electrical apprenticeship. He was a member of the International Brotherhood of Electrical Workers Local Union 80 and had been working for E. G. Middleton for 25+ years. He was predeceased by his father, John Murphy Sr. and survived by his wife, Lori Murphy, his daughters, Morgan Murphy and Jenna Murphy, and soon to be grandson, (MaKinlee Donovon Jay Morrow) whom he loved more than anything in this world. Those who also live on to remember him are his mother, Dorothy Speight, 3 sisters, Janet Carlo (Vince), Paula Heskett (Mitch), Pam Murphy, brother, Jimmy Murphy, Sister-in-Law, Barrie Engel, Brother-in-Law Marc Engel (Dina), and multiple nieces and nephews, (Crystal, Eddie, Michelle, Ryan, Kristen, & Joyner), and more friends and acquaintances than can’t be counted. John was the life of the party and a stranger to no one. He had an uncanny ability to start a conversation with someone he didn't know, and then they would feel like they were old friends in an hours’ time. John was so full of life. He enjoyed riding around the neighborhood on his golf cart and blasting his favorite music until asked to turn it down. He loved playing games, and would beat most anyone (cards, ping-pong, cornhole, etc.) because he “got it down to a science.” He loved watching football, was an avid Washington Football and Tom Brady fan, and was excited about watching this upcoming season, even though he always wished they'd play better. John would always say that his body was old, but that his mind didn’t age. He is now free of all of those aches and pains. Many people might say “he’s resting easy now,” but we doubt he would want to rest. He’s probably playing sports again, beating everyone in Heaven who tries to take him on.
To send flowers to the family or plant a tree in memory of John Murphy, Jr. , please visit Tribute Store
Tuesday
21
September