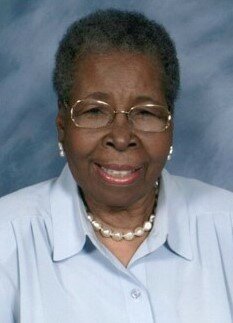 Please share a memory of Melvine to include in a keepsake book for family and friends.
View Tribute Book
Mrs. Melvine Calhoun Blakeley departed this life peacefully and quietly in her home surrounded by family on March 16, 2022. Melvine was the oldest daughter of the late Clarence W. Calhoun, Sr. and Thelma Johnson Calhoun. Melvine was a very faithful member of Shiloh Baptist Church where she was once the Chairperson of the Decoration Committee, always securing and making sure beautiful, fresh flowers adorned the sanctuary for special occasions. She was a member of the Eliza Ann Coppage Bible Class and served as an usher for many years. Educated in the Norfolk Public School System, Melvine was a graduate of Booker T. Washington High School, Class of 1947. She continued her education at North Carolina A&T State College where she earned a bachelor’s degree, and became a member of Alpha Kappa Alpha Sorority, Inc. She furthered her education at Columbia University in New York, where she earned a master’s degree. She taught for a year in the Murfreesboro, (NC) Public School System before being employed by Norfolk Public Schools. She retired after 42 years of dedicated service. Melvine was one of the founders of Les Gemmes Incorporated that began in 1955. She was extremely proud of her organization and its notable achievements and successes over the years. Melvine was predeceased by her parents; brothers, Clarence W. Calhoun, Jr. and Clinton J. Calhoun, Sr.; and her sister, Corrine L. Williams. Those left to cherish her memory include her devoted nieces, Thelma Q. Ruffin (Washington), Louise W. Epps, Belindarae W. Benn, Karen B. McDaniels, Corrine W. Smith (Daniel), and Christi I. Johnson; her nephews, Clinton J. Calhoun, Jr., Thomas D. Calhoun, Sr., Robert E. Calhoun, Sr., and Terry G. Calhoun (Tikisha); several cousins, great nieces and nephews; her aunt, Frances J. Prince; goddaughter, Blakeley I. Calhoun, and a host of other relatives and friends.
To send flowers to the family or plant a tree in memory of Melvine Blakeley, please visit Tribute Store
Print
Sunday
27
March