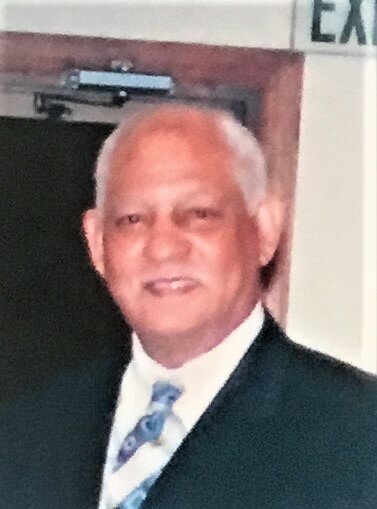 Please share a memory of Wauna to include in a keepsake book for family and friends.
View Tribute Book
Wauna Lewis “Butch” Dooms Jr., beloved husband, father and faithful friend peacefully departed this life on August 3, 2022 at his home in Virginia Beach, VA. Butch, as he was affectionally known, was born on Feb 3, 1943 in Durham, NC. He is the only son of the late Wauna Dooms Sr. and Martha Spaulding Dooms. Butch was educated in the Durham City School System graduating from Hillside High School in 1961. After graduation, he attended Hampton Institute and subsequently transferred to Norfolk State College where he earned a Bachelor of Science Degree in Business Administration. It was there that he met the love of his life, Viola Ann King. Their Love and Marriage lasted 56 years. Butch was drafted into the United States Army serving 2 years. After his tour of duty, he returned to Norfolk and began his career in business which impacted countless individuals throughout his lifetime. He held several positions in banking, business development and entrepreneurship and spent several years as the Director of Project Outreach, a division of the Tidewater Area Business League. He later served as the Director of The Tidewater Area Business and Contractors Association (TABCA). Upon leaving TABCA, Butch began his extraordinary entrepreneurial journey and opened his first of three convenience stores in Norfolk, VA as well as operating two fast food restaurants with his wife at the Waterside and Patrick Henry Mall under the Lynn Allen Incorporated umbrella. Collectively, they employed more than 100 people over the thirty years of owning their businesses. In order to share his business acumen, Butch served as the Director of the Small Business Development and Technology Center for the State of North Carolina until his retirement. Butch’s spiritual life was very important to him as he was a long-time member of the Historical First Baptist Church, Bute St. Everyone he encountered was greeted with his infectious smile and warm gaze. Butch never met a stranger. Being devoted Lifetime Member #177 of Omega Psi Phi Fraternity, Inc., he first pledged Pi Gamma Chapter at Norfolk State and later joined Lambda Omega Chapter. During his 58-year membership, Butch served in excellence as Basileus of Lambda Omega Chapter from 1980-1982 and was instrumental in establishing the Annual Lambada Omega Pancake Breakfast which remains one of the primary fundraising events for the chapter to date. Butch received the distinguished Omega Man of the Year Award and was an Emeritus member of the Norfolk Chapter of the National Association of Guardsman, Inc. Butch remained an avid sports fan throughout his life. At Hillside High School, he was a highly talented quarterback. In his adult life he enjoyed supporting his alma mater’s football and basketball teams. Many fun times were had at the CIAA tournaments through the years. His favorite past times where fishing, being surrounded by family and friends and being the consummate host of various parties and summer cookouts by the pool. Left to cherish his memory are his devoted wife Viola Ann King Dooms, son, Mark A. Dooms (Jeffrey) and daughter, Monica Dooms Davis (Wesley). He is also survived by his beloved cousin, James A. Stewart (Frances), nieces, nephews and a host of relatives and friends.
To send flowers to the family or plant a tree in memory of Wauna Dooms, Jr. , please visit Tribute Store
Print
Friday
19
August