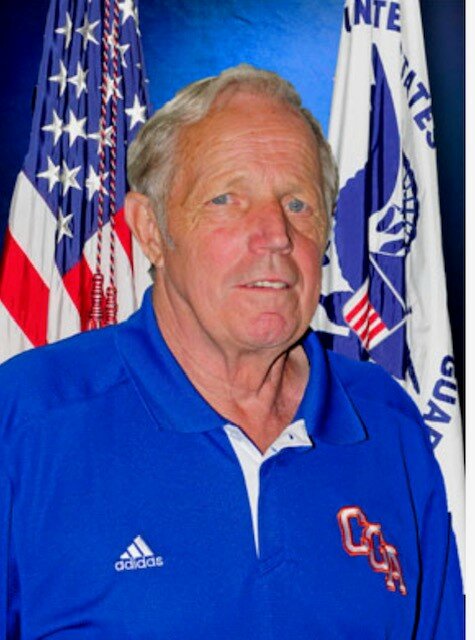 Please share a memory of Stephen to include in a keepsake book for family and friends.
View Tribute Book

We are saddened to report that Stephen Eldridge passed away of natural causes on September 2, 2022, in Virginia Beach, Virginia.

Steve was born in Fairbanks, Alaska on February 13, 1942, to Reverend Elsom Eldridge and Elizabeth “Betty” Eldridge. As an Episcopal minister, Elsom and his family moved frequently; however, their family’s anchor was their home in Heath, Massachusetts since the 1940s.

Steve graduated from high school in St. Louis, Missouri where he was recruited by the Missouri Tigers. Steve played on both the Mizzou football and wrestling teams before graduating with a masters degree from University of Missouri in 1966. He was extremely lucky to land the job of a lifetime directly out of college; he was hired as an instructor and coach at the United States Coast Guard Academy (CGA). Starting as head wrestling coach and an assistant football coach for the Bears, he later transitioned from football in the early 70s to coach cross-country. He coached both the men and eventually women’s cross-country teams for 43 seasons while coaching 47 years as the wrestling coach.

Coach E. had a profound impact on all his students and athletes throughout his 47 years of coaching. He encouraged many of them to reach unbelievable heights in their sports while also mentoring them to remain focused on opportunities beyond the Academy. Steve was tremendously proud of his athletes as they continued to achieve greatness in their careers, both in and out of the Coast Guard. Steve’s giving tenacity set a powerful example and it enabled his students and athletes to become better members of society.

In addition to his contributions to building leaders in the Coast Guard, Steve loved animals, particularly horses.

Breeding, training, and showing Arabian horses was Steve’s passion outside of the CGA. He competed and won blue ribbons into his 60s. The beauty, strength and composure of his horses reflect Steve’s character, and the qualities he instilled in those around him.

Steve was most proud of his children, Patrick and Jeffrey, as well as his grandchildren, Sydney and Jackson. During his last years he most enjoyed watching Sydney play softball and Jackson improve on the wrestling mat.

Steve is survived by his sons Pat and Jeff, his grandchildren Sydney and Jackson, his brother Elsom Jr and family, his brother Mark’s family, and many, many beloved friends. Steve was preceded in death by his parents, Elsom and Elizabeth “Betty” Eldridge, and his brother Mark Eldridge late last year.

In lieu of flowers, please consider a donation to one of Steve’s favorite teams: the CGA Cross Country Team or the CGA Wrestling Team via the CGA Alumni fund (link)or his recent favorite wrestling program – his grandson’s club team (Link)

Share Your Memory of
Stephen
Upload Your Memory View All Memories
Be the first to upload a memory!
Share A Memory