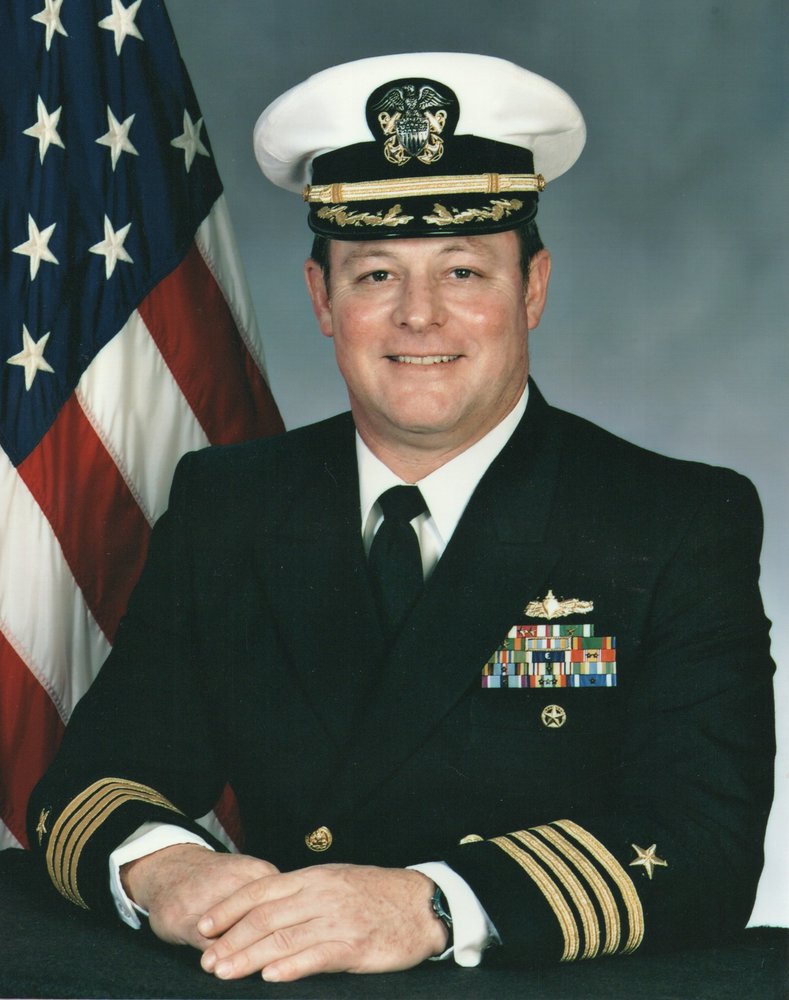 Please share a memory of Stephen to include in a keepsake book for family and friends.
View Tribute Book

~~Capt. Stephen Patrick Curtis (USN, Ret.), 62, passed away on November 15, 2017 surrounded by his loving family. He was a native of Decatur, IL, and the son of the late Jerry E. & Rosemary Jobe Curtis. A 1978 graduate of the United States Naval Academy, he was commissioned an Ensign in the Navy by then President, the Honorable Jimmy Carter. In 1996 Capt. Curtis earned his Master of Arts degree from the Naval War College, Newport, RI. During his 30 years of services to the United States Navy his commands included: Executive Officer of the Mount Whitney and Commanding Officer of the USS Trenton. From 1998 to 2000 he assumed duties, as Commander, Maritime Prepositioning Ship Squadron ONE for a one-year period. Over the final three years of his active duty service, Capt. Curtis served as Commander, Military Sealift Command, Atlantic/Commander, Naval Fleet Auxiliary Force – East and, subsequently, as the director, Ship Support, Sealift Logistics Command, Atlantic. In June 1995, Capt. Curtis participated in the coordinated and successful rescue of USAF Capt. Scott O’Grady, whom had been shot down behind enemy lines in Bosnia. Capt. Curtis retired from active duty service in April 2006, and at the time of his death Capt. Curtis was employed with CSRA as a Defense Contractor.

In addition to his illustrious military career, Capt. Curtis was a loving and supportive father, husband, and grandfather. He will be remembered for his craftsmanship, love of travel, and lifelong love of sports, He was an avid St. Louis Cardinals Baseball fan.

Capt. Curtis is survived by his loving wife Winifred, two sons James Curtis and his wife Heather and Benjamin Curtis and his wife Michelle, and stepchildren Claire McNally and Brian Millar. Three siblings; G. Michael Curtis, Julie Danenberger and her husband Steven, Jill Heick and her husband Martin. He will also be missed by 13 grandchildren, numerous nieces, nephews and co-workers.

A graveservice celebrating Capt. Curtis’ life will be held at 11:00 am, Tuesday, November 21, 2017, in the Phoebus Section, of Hampton Nation Cemetery, located on W. County St. Hampton Virginia. The family will receive friends Monday from 5:00 until 7:00 pm at Turning Point Church, 2641 Princess Anne Road, Virginia Beach.

A Celebration of Life Gathering will be held in Decatur, IL, at a future date to be announced.

To send flowers to the family or plant a tree in memory of Stephen Curtis, please visit Tribute Store
Monday
20
November